Rick and Mary Tuttle Make a Legacy Gift in Gratitude

for InterVarsity and Life-Changing Urbana 87

It was at InterVarsity’s Urbana conference in 1987 that Rick and Mary Tuttle committed their lives to Jesus Christ. That commitment led to an estate gift 10 years later when the Tuttles gave birth to their first child after a decade of trying.

“Making a gift to include InterVarsity in our estate planning really started at Urbana,” Rick says. “We had nothing and were just starting as a family; but we decided to honor God with our resources, whatever they would be. When we had our first child, we thought about what to do with our will.” 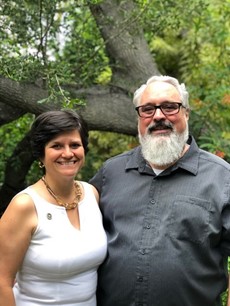 Mary adds, “We had been barren for 10 years! So just the fact that God had given us children got us thinking about what we wanted to leave as a legacy for generations to come.”

The residents of Miami met as students at Florida International University. Rick works as a Web application developer; technical skills he developed while involved with InterVarsity helped him land his first job. He also serves as a volunteer worship leader at their church and has written several Christian songs. Mary is a volunteer staff with InterVarsity’s Graduate and Faculty Ministries on three campuses. She was an executive in higher education before deciding to homeschool both of their daughters.
“We want to give back because InterVarsity for us was a life-changing experience—the catalyst for a life that has really been fruitful,” says Rick.

“InterVarsity was very important to me as a child of Cuban immigrants who had a pagan background,” Mary says. “God has used InterVarsity to help us find our passion and purpose in the church.”

InterVarsity Christian Fellowship/USA is a tax exempt nonprofit organization under 501(c)(3) of the IRS Code; all donations to us are tax deductible. Learn More
Login